The Underground railroad quilts have always fascinated me, ever since a friend of mine told me about her grandmother hanging quilts over the fences at their homestead in America for slaves escaping to freedom on the underground railroad.

Run by a network of abolitionists beginning in the late 1700’s and especially after the Fugitive Slave Acts in 1793, this was mainly supported by the Quakers and the African Methodist Episcopal Church and continued until the end of the Civil War.  This network helped enslaved people to move North to Canada and freedom.

Each block had a meaning and helped many slaves escape safely. 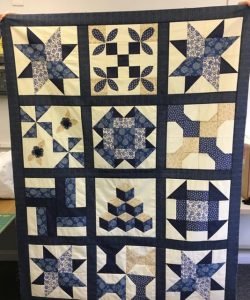 We have made many of these blocks in our sampler quilts and I was thinking that I might make an Underground railroad quilt just for the history alone and then to have another story to tell when people ask about the origins and stories behind a block.

So from the beginner samplers we have made over the  years the following blocks could translate into a quilt to help and enslaved person gain freedom.

Bear’s Paw – one of my favourite blocks – Follow a mountain trail out of view and then follow the bears tracks to water and food.

Flying Geese – This block was used as a guide to find water,food and a place to rest.

Tumbling blocks – so the slaves would know it was time to pack up and move along as there was a conductor in the area.

Monkey wrench – for a slave to know that it was time to gather all the tools needed for the journey when fleeing , both mental and spiritual.

Star – Usually the North Star – refers to the Big Dipper and to follow the star Northwards.

Its very inspiring to hear out these quilts and the women that made them and you can look at the quilt you’ve made with new light.